The solar-powered aeroplane Solar Impulse has landed in Silicon Valley, California, after a three-day flight over the Pacific Ocean from Hawaii.

High winds delayed the landing at Moffett Airfield, Mountain View, as pilot Bertrand Piccard flew in a holding pattern off the coast.

“The Pacific is done,” he declared just before landing.

The latest leg of the round-the-world flight was the riskiest yet because of the lack of emergency landing sites.

Fellow pilot Andre Borschberg hugged Mr Piccard when he stepped from the cockpit.

Google boss Sergey Brin was also at the airfield to greet him. “It was a beautiful landing, we were right there watching,” he said in a clip tweeted by the plane’s media team.

All from the sun

“You know there was a moment in the night, I was watching the reflection of the moon on the ocean and I was thinking, ‘I’m completely alone in this tiny cockpit and I feel completely confident’,” Mr Piccard told reporters afterwards.

“And I was really thankful to life for bringing me this experience; it’s maybe one of the most fantastic experiences of life I’ve had.”

He predicted that, 50 years from now, electric aeroplanes would be “transporting up to 50 people”.

With 17,000 photovoltaic cells on its top surfaces, the plane gets all its energy from the sun. These power the craft’s propellers during the day but also charge batteries that the vehicle’s motors can then call on during the night.

Solar Impulse started its journey in March of last year in Abu Dhabi, with the two pilots taking turns in the cockpit. 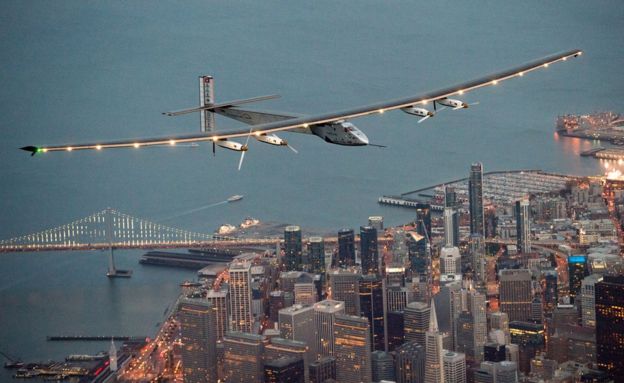 It crossed Oman, India, Myanmar and China before flying to Japan, from which it undertook the 8,924km (5,545-mile) passage to Hawaii.

That five-day, five-night crossing set a record for the longest ever non-stop solo aeroplane journey.

However, the vehicle’s batteries overheated, forcing the project to stop on the Pacific archipelago for eight months while repairs were conducted.

A further 20m euros (£16m; $23m) had to be raised from supporters during the winter to keep the project going for another year.

It was Mr Borschberg who flew into Kalaeloa last July and he will take the controls on the next leg across the US mainland.

The two Swiss pilots’ intention is to reach New York by the start of June, to begin preparations for an Atlantic crossing.

Assuming this is completed successfully, it should then be a relatively straightforward run back to the “finish line” in Abu Dhabi.

Mr Piccard and Mr Borschberg have been working on the Solar Impulse project for more than a decade.

A plane wider than a 747 jumbo jet but that weighs just 2.3 tonnes poses some unique challenges: